Last week I was wanting to do something on my site sort of a ‘breaking news’ style banner that would span the entire site width but only when I wanted it too – based on a cookie or something else.  And I didn’t want to do something server side, because I was sick of doing stuff like that.

Not having played with jQuery, I thought I’d take a dive.  Prior to MIX09, I’d been testing something that the MIXOnline team had been toying with, which has just been released: Glimmer.  Glimmer is described as a jQuery Interactive Design Tool.  A helper for those like me who know nothing about it.  Sure, jQuery has a ton of resources, and my Twitter peeps came through helping me navigate some of the things that aren’t glaringly obvious for noobs like me :-).

But Glimmer got me started, and I think that’s the point.  I had an overall HTML structure already and had the div element that I wanted to work with in jQuery – my goal was to animate it in a ‘breaking news’ sort of manner (or at least what’s in my head when I think of that concept).  I opened up my HTML in Glimmer and went to work.  I simply added the action (the function I wanted to trigger), then pointed it to the element to target.  Here’s what my simple Glimmer UI action setup looked like: 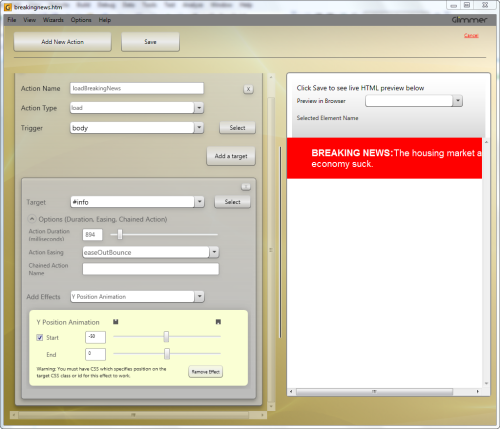 I clicked save and it created a JavaScript file for me with the completed code:

Sure, to you jQuery pros, this looks simple, but this tool helped me quickly use a design-time tool to generate this without previous knowledge of jQuery.  Now, I’ve learned a few things about jQuery since my first incarnation – all of which took 2 seconds with Glimmer.  I decided I wanted to use the built-in “slideDown” feature in jQuery.  Some things like this aren’t supported in Glimmer yet, but simple things are…and quite frankly, the combination of Y position animation and an easing function accomplished the same goal.

I made a few hand-modifications to fit my needs (checking for cookies to trigger the banner, etc), but Glimmer got me started right away figuring things out quickly…it was awesome.  I think it comes with a free ShamWow as well, I’m not sure, but I swear Karsten told me that. :-)  Check out Glimmer today if you are new (or even seasoned) to jQuery.  There is a plugin model I haven’t explored, but check out the Glimmer project site for more information.

Next maybe I should explore working with jQuery and Silverlight as I know there is more to jQuery than animations and I think it would make a helpful library for the HTML interop layer.