After reading James’ story just now, I’m so glad that a Windows Home Server is a new addition to my home.  It’s funny…about 4 years ago I think I had 6 active machines in my house.  Now we’re down to my work laptop, my MacBook, my wife’s laptop and a new desktop for my wife’s photography and graphics stuff.  Okay, I guess that’s not down much, but they all aren’t “active” that much anymore.

Back then I had no backup strategy.  In fact, I’ve still got a laptop drive that clicks that I’m destined to get the data off of!  I’ve heard so much about Home Server though and James’ story isn’t the first.  Over the past 4 months I think I’ve heard about 10 similar stories.  Hardware went bad and within a few hours it was as if nothing happened.  I almost pulled the trigger on a Home Server last month, but was hinted to wait.  I read all the reviews about previous HP models and how people thought they were great but the first thing they did was upgrade drive and memory. 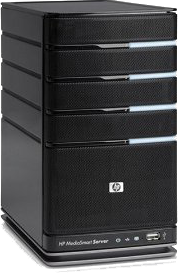 This month HP release the EX487 Home Server.  This is a 64-bit machine with 1.5TB of storage and 2GB RAM.  It basically sits idle with subtle blue lights until tragedy may strike.  And even if it doesn’t strike, it’s now serving an extremely important role!  My experience this first week has been great.  The setup was amazingly simple sans one issue.  I use OpenDNS at home and had to use manual host file modifications to find my server on some of my machines…not a big issue.  Other than that it was literally plug it in, connect to the LAN and configure (which was basically to give it a name).

On each machine I wanted connected I installed the agent software and it immediately started backing up.  Oh, and my MacBook?  Yeah, that too!  Home Server can serve as a Time Machine drive for your Mac…it’s awesome.  Now all my machines are just automatically backed up without thinking of it!  I also moved all my media (MP3, Video, Pictures) to that server for safety and the EX487 can stream music and your iTunes library if desired (yes even DRM music they claim).  The one other feature I liked about it was automatic integration with Amazon S3 storage.  I know JungleDisk has a plugin for Home Server as well, but the new models come with this feature installed.  So I have reliable local backup and can push my critical data to Amazon S3 for “offsite” storage in the event of catastrophe (did I mention my neighbors house burned down 2 weeks ago?).

The initial backups took a lot longer than expected (especially the MacBook), but I don’t have gigabit ethernet at home and I did one over wireless.  After they completed though, now everyday it just gathers anything new and puts it in the vault.  I love it…no thinking for me.  You can even configure wake-on-LAN to start a backup if your machine supports it.  So far I can’t find anything I don’t like about it at all.  And all the stories I’ve heard make me want to try to break something just so I can restore it.  Actually, one thing it can be used for is disk imaging – create your “paved” machine and save that backup off permanently…I’m going to be doing that soon with Windows 7.

There are two new models and from my shopping I felt Amazon had the best deal (both as price/shipping and as a reputable retailer).  The HP EX485 sells for less but is also less space (750GB).  That’s about the only difference.  I figured the incremental cost for double the space was worth it.  In hindsight it may not have been considering you can get a 1TB drive for about $100 now (I added one of those as well for a total of 2.5TB storage).  Either way the HP EX485 or the HP EX487 would be a great choice.  Plug it in, configure it, forget about it.  So far I concur with others that this will be a worthwhile investment for the home!