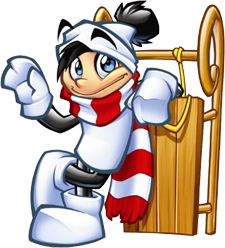 One of probably the coolest casual ‘games’ I’ve ever seen is Line Rider.  It’s a fun game, but really gets exciting when you have an artist behind it.  Basically it’s a blank canvas for you to draw a route for the main character to hop on his sled and ride.  Sound lame?  Not when you see what some have come up with.  For example, here’s a very popular ‘ride’ on YouTube.

Well, the Line Rider team has recently modified their beta version and implemented in Silverlight 2!  They’ve also added some social networking integration using Live Messenger and the ability to send your rides to your contacts, etc.  The team was a group of developers and designers from the Line Rider team from InXile Entertainment as well as the crew from Cynergy Systems.  The Line Rider game was also used in a creative McDonald’s television campaign as well – McDonald’s gettin’ all involved with the interwebs…cool.

In addition to the Silverlight version, InXile has announced console versions for XBOX 360, Wii, and PS3.  I think that will definitely a must get console game for myself and for the kids.  This Silverlight version really demonstrates some great things in Silverlight 2 and shows that the platform is a great one for casual games and how creative you can be with what version 2 has to offer.

Congratulations to the Line Rider teams!