In my previous post on moving to free HDTV, I had talked about my desire to change our home television “stuff” in an effort to remove basically a bill that we weren’t taking advantage of at all.  Part of the irony in this whole exploration was that by the time I figured out a solution, the whole digital-TV-signal-broadcast-rule-thing was going to happen.  Luckily, I received some good advice and product suggestions.

If you read the previous post you’ll notice that I acquired a Philips MANT940 antenna from Walmart.  $38 investment not bad.  I crawled up into my attic space and put it in a non-optimized location…and it worked anyway.  I tested it on the only HD tuner I had in the house at the time, my WinTV 950 adapter for my eyeTV software on my Mac.  It worked great. 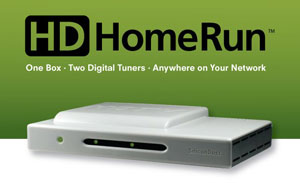 My problem was still that my TiVo units were going to be a loss and I didn’t want to fiddle with IR blasting anyway.  Then someone recommend I take a look at the HD HomeRun unit from SiliconDust.  I got a few emails from people who had it.  I had some Amazon credit and they had a good price, so I went for it.  I figured if it sucked, just return it.  The concept of the HD HomeRun is that it is a digital tuner with two inputs and delivers the signal over your LAN.  This was the most intriguing to me.  I had a lot of suggestions of Media Center PC.  I love Media Center PC, but didn’t like the thought of having a ‘computer’ in my living room or basement near a TV.  It doesn’t feel right (and I didn’t have coax wired to where my Media Center box was anyway).  But HomeRun would allow me to deliver it over the LAN, so my existing box could pick it up as a tuner.

The HD HomeRun arrived.  I opened it and plugged it in.  One cable to the network - not gigabit :-( - and the other was the new antenna I acquired.  I went to my Media Center PC and ran the HD HomeRun setup software provided.  It scanned for a tuner and didn’t find one.  Crap!  I thought I was going to be screwed.  I did some searching and noticed that I wasn’t alone with the "Discovery Error 4001” message I was receiving.  It seemed like an incredibly known issue, which is weird why they are shipping units with the issue.  I logged a support ticket with my device ID (required) and they sent me a little executable to run.  I ran it and it suddenly was discovered in the scan.  Weird.  No explanation of what the issue was.  I didn’t necessarily care, and moved on.

The HD HomeRun config is pretty intuitive and you select the tuner input, the type (antenna) and then what type of application will be accessing it (Media Center).  It scans, finds the channels and done.  It comes with guide software as well, but seems a little pointless as Media Center has all that built in as well.

The Media Center found the unit as a tuner and went through the normal process.  Quick and painless.  A walk down to the basement to the XBOX 360 and turned on to watch free HDTV via my new HD HomeRun.  Awesome.  Thanks for the recommendation for that unit!

The second thing I wanted to do was use my Mac and eyeTV on the same unit.  Didn’t work.  I should clarify that I probably had a bad assumption.  It found and configured the HomeRun as the tuner, but I couldn’t watch any stations as long as another machine was using the tuner.  Suck, but I understand I suppose.

I’m very pleased so far with the HD HomeRun solution and get to play around with Media Center now.

Question: Media Center gurus, how can I search for a program to record a series?  I could only find the ability to record a series if I find it in the guide.  I’m looking for the TiVo like functionality of searching for programs by title.

I’m going to hook up another Media Center Extender in my living room to see how that works out.  I see some MCE’s come with DVD players so that would be cool and I might try that.

If you already have a Media Center PC (Vista) and an XBOX, I’d recommend looking at the HD HomeRun if you are looking to rid yourself of cable as I am and only care about over-the-air HD channels.  It’s been fun to investigate and learn.